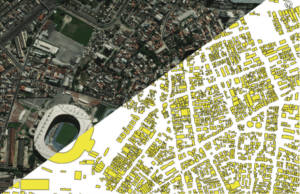 [Via Satellite 01-10-2017] DigitalGlobe announced the results of the first SpaceNet Challenge, which will release openly licensed satellite imagery of Rio de Janeiro taken from the WorldView 2 satellite at 50cm Ground Sample Distance (GSD) using eight spectral bands. SpaceNet is a collaboration between DigitalGlobe, CosmiQ Works and NVIDIA, which consists of an online repository of freely available satellite imagery, co-registered map layers to train algorithms, and public challenges that aim to accelerate innovation in machine learning.

DigitalGlobe launched the first SpaceNet Challenge in November 2016, and 42 developers competed in an open challenge hosted by TopCoder to create algorithms that extract building footprints from satellite imagery. The participants submitted 242 solutions over a three-week period to compete for a total prize pool of $35,000 that was awarded to the top five performing contestants. The winning algorithms will be made available to the open-source community through the SpaceNet GitHub repository and users of DigitalGlobe’s Geospatial Big Data platform (GBDX).

“We are really thrilled by the developers’ level of engagement to use DigitalGlobe imagery, training data, and open-source code to create innovative algorithms,” said Tony Frazier, senior vice president and general manager of services at DigitalGlobe.

A newly released Points of Interest (POI) dataset for Rio de Janeiro is now freely available to the public via SpaceNet on AWS. This data is made available through the participation of the U.S. National Geospatial-Intelligence Agency, which licensed the dataset produced by DigitalGlobe. The Rio geodatabase contains 12 datasets with 35 unique layers containing more than 120,000 individual points of interest.

The next phase of the SpaceNet Challenge will be a follow-on competition using DigitalGlobe’s 30 cm imagery from WorldView 3 and building footprints across new locations around the globe. The competition will challenge developers to improve performance from the first competition using the higher-resolution imagery and more geographically diverse training data samples.